So, I am officially a VCD (Visual Communications Design) student, and that’s the fancy way of saying that I’m a graphic design student. One semester of time consuming and emotionally exhausting art making was just the start of a long road to hopefully a successful future for me.

Just a sidenote: I have a tumblr blog where I post more frequently about what I’m doing and what my latest and greatest inspirations are.

And from there I just want to talk about what I have found to be a dilemma for designers and basically all who create in general. The fine line between what we find to be inspiring and what we actually take away from it and use. The latter bordering a well known term called plagiarism or appropriation. And since realizing the difference between plagiarism on an essay and plagiarism in art, I am a lot more aware and almost restless every time I start a new project because plagiarism in art is a bit more complicated than I had ever really realized.

At the beginning of my first semester, my professors strongly laid out the rules for what was acceptable and what wasn’t. The rules for writing a paper are as simple as not copying more than 4 words in a row from someone else’s writing without proper citation. As for art, your ideas have to be original and all the material you use (design wise) have to be yours. This is difficult because its possible to have a great idea and not know someone else already had that idea. (That’s why apps exist for such instances where you can take a picture of your work and the app will search the web for all work that looks similar.) For my third project in my Principles of Art and Design class, we could draw anything we wanted in micron pen using the design principles we learned. We also had to take the feeling that our previous wire sculpture project portrayed and translate that feeling into our drawing. Mine was a side portrait with a leaf hanging off of it as seen in the picture below. (for that project we only got wire and string and had to make a freestanding piece) I decided to take that opportunity to draw what I was best at drawing: people. And I originally wanted to depict a celebrity and make it “fan art” but I had doubts about being able to do that because I didn’t take the picture I was going to copy. Sure enough, I wasn’t allowed to copy pictures that I didn’t take. So, I picked a picture of a friend and drew that friend’s face with a few changes to make the person unrecognizable. Little things like that we usually never second guess ourselves about, but now I’m in this for the long run. More than ever now, I have to pay attention to the details and check with my professors, if I am appropriating. For portfolio, I didn’t even want to include my most favorite picture I took this semester of paper cranes because I didn’t design the origami paper myself. That would count against me. 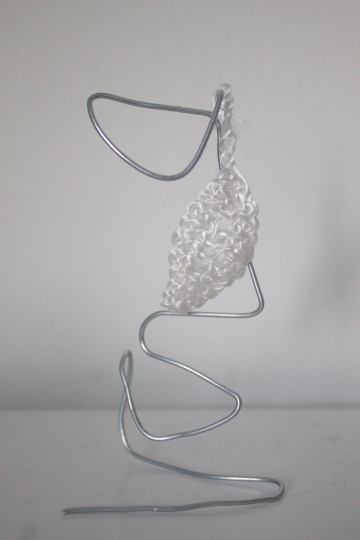 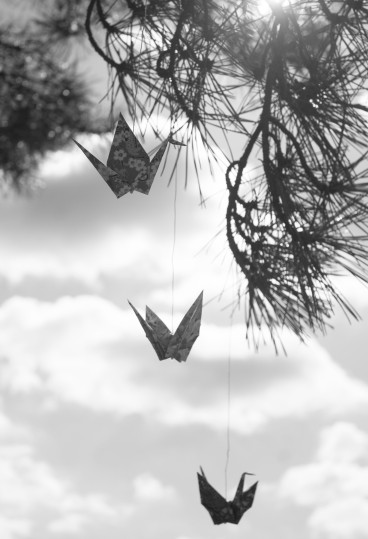 Possibly the one I had to be the most careful of was my main project that I included in my portfolio. I was asked to design an album cover for a friend, the logo and her branding, and shoot a music video (promo). A photo book of concept pictures was partially my idea because I wanted to make a complete product and show process work through it. Now, overall this project was hard considering I took the role of everyone except the musical artist herself. So basically, I was photographer, makeup artist, graphic designer, videographer, editor, film director, and creative director. This was actually a great experience and I have a new found respect for all the individuals that make up the music industry’s staff. It was tedious work and I never before knew exactly what it felt like to be creatively exhausted. I had been so used to the left side of my brain being dead. But my right has never had a workout this hard. But through the whole process, I had to watch my every step and every decision, making sure I didn’t grab some unconscious image/idea I had seen before and use it. And I learned so much of what it’s like working with a client. Like a LOT.

There were so many details to be attended to and things to consider, like whether or not I should make an actual process book, how to work with certain artist-desired-colors, what makeup look to do for pictures, what font to use, how to angle and shoot MV shots, how to capture the feeling the artist had for each song with images, how to do a digital painting with just a mouse pad and illustrator, etc.. There were so many things that are all important decisions and some could potentially make or break the whole piece. Some of these things are simple to learn by themselves but together, it was one of the toughest thing I’ve ever had to do. And I’ll never again take for granted all the details that go into all these design areas and the hundreds of questions that need to be addressed because every detail matters. People might think that’s the perfectionist in me, but that perfectionist considers the the audience and you want perfectionists working on any design product so all parties are pleased with the outcome. Through that I have also come to appreciate the perfectionist in me. In the end, the elements of this project were the strongest pieces in my portfolio. Unfortunately, due to the direction of my life and the artist’s life, I won’t be seeing the project to completion.

All that aside, there is much to consider when you “create”, because it could turn out that someone had already beat you to it, or you accidentally grabbed something you’ve seen before and “recreated” it. Which is totally not cool. And that’s the part where I become really uneasy because where does something inspiring cross into being plagiarism on my part? And when is art appropriation allowed and gone too far? And this may be something I get better at differentiating over time and with more experience. However, I should never get lazy in second guessing myself.

For my friend’s music video promo I grabbed inspiration from Taylor Swift’s Out of the Woods and for her concept photo book I grabbed inspiration from the one music industry that slays at photo books and album packaging design: Kpop. I specifically grabbed inspiration from the Love Yourself album: Her ver. L photo book and the iKon New Kids single album ver. black. The photo book was harder to design and work with because there is only so much you can do with photos and the page size you are given. The MV inspiration was just because the MV promo for my friend was also shot in the woods and I wanted to know how one worked with trees in shots. Wasn’t all too helpful to be honest. But for the photo book, page numbering, page layout, credits, balancing the overall layout of the book, color choice, font choice, were all things to consider. I studied both photo books, front to back, the patterns I saw, font choice, color patterns, everything. I noticed things like the LY album had a clear decisive photo layout pattern going on, while the New Kids album did not but rather messy which totally fits its entire conceptual feeling. But all the while, I had to make sure I wasn’t taking what I saw and making it my own.

Now, I do get inspired generally. And mostly having to do with kpop packaging. Because some of the stuff I’ve seen are simply genius and I feel like an idiot for not having such great ideas. (But one day…) Seriously though, the MVs also are such a great inspiration for concepts and out of the box thinking for cinematography. Kinda makes me upset that we, Americans, don’t package the way they do or take the time to make things look as nice. We package more for convenience, they do it for the art of it and for marketing advantages. They do the best marketing out of any music industry globally. (This is just honest recognition of their genius play in the entire music industry. I’m a huge admirer of people who think differently) I can get super nerdy about all this though. But with this, I can so easily fall into the appropriation hole that I’m trying so hard to avoid. “Everything is so beautiful!!!…..but not mine.” <—This is my dilemma. And being someone who wants to eventually work her way up to a creative director position in this industry, I’m simply torn and extra careful.

Another fun place I grab inspiration, is from fashion. Yeah. I know. I live and breath design. And when I make it, you bet I look good while doing it. LOL but I grab so much spunky energy and new thinking from fashion. Even if I hate a piece of clothing or an outfit, I like to think of why someone else might like it. Both western and asian fashion are interesting to me. But I do specifically lean towards Japanese and Korean fashion trends and street wear. I think that has to due with the fact that I’m half Japanese, have quite a few Korean friends, lived in Asia for half my life, and Singapore being one of my favorite places on earth.

Here’s a short list of models and fashionable people and their Instagram links that inspire my thinking towards design and my aesthetic both in dress and lifestyle:

These last two are brothers and Japanese models based in Korea. And to be completely honest, I love Eiji’s style, but I’m trying really hard to understand Masashi’s. As far as inspiration goes however, Masashi is not short of inspiring. He is both a model and designer and I guess you can say makeup artist too, which to me is like the coolest and most progressive thing he can be doing. I actually applaud him for not being stagnant with his dreams and building on the creative talent he already possesses.

This is a good representation of their individual styles:

And I hope this was helpful in understanding the design process I went through this past semester and what currently has been my inspirations for the work that I do.